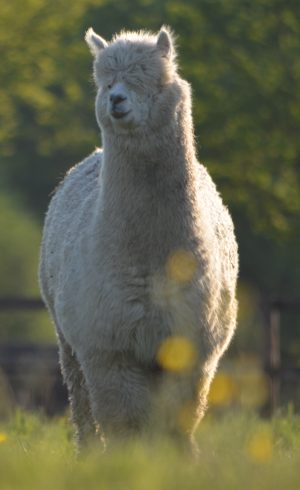 Our alpaca studs have a particularly calm, balanced, and curious character. This is – apart from the excellent fleece quality and the proper body structure – a crucial aspect. After all, the stud has a decisive influence on the quality of the alpaca offspring. For that reason, choosing the appropriate stud for your mare should be made with great diligence. On this page, we are presenting our alpacas as well as the stud service.

Alpacas are induced and provoked ovulators. This means that the ovulation of a mare is not subject to a cycle, but is only triggered by the stud during the covering act. Therefore, alpaca mares are capable of being successfully mated independent of the season. We, however, recommend scheduling the mating for the beginning of spring. 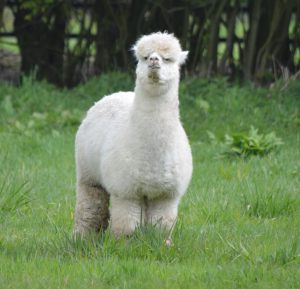 Nevado is a son of Peruvian Dolores and Peruvian Ricardo. He is characterized by an extremely fine fleece with very long fleece growth. 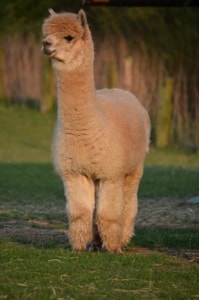 Huascar is a particularly trusty stud that not only passes on his excellent fleece characteristics but also his temperament. We would recommend him for colored mares, as he usually inherits the color of the mare or darker. He is a half-brother of Ricardo; his father is Accoyo Amando. 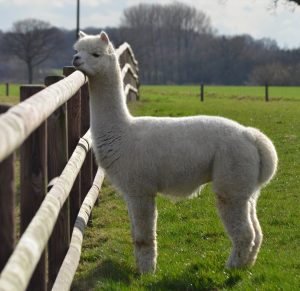 Highland Yuma is a son of the outstanding stud TruHighlander. Yuma impresses with his perfect physique. His soft and fine fleece has a lovely, pronounced crimp. He has grown into a handsome stud.

Yuma has been presented at the herd book screening of the AAeV in spring 2016. His result: Maximum score in body structure and excellent fiber evaluation by the judges.

With the achieved score of 542, he is no. 3 of the best list in color class 1 of the herd book of the AAeV. He has inherited his balanced and calm nature from his father. Do not miss the chance of this great genetics and benefit from Yuma in the next breeding season. 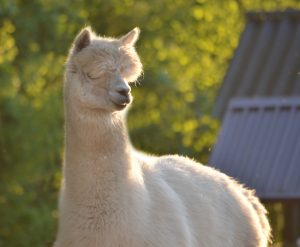 One of our foundation studs, if not our best foundation stud. He is a son of Accoyo Amando bred by Jan van den Hoek from the Netherlands. His offspring and his siblings have won many prizes at various shows. Ricardo passes on a robust build and a beautiful head shape. Besides that, he has excellent fleece growth with a pronounced crimp.

The son of the legendary hereditary prince, ADA Fidermark, inherits a heavy coat of thick wool with an exceptionally beautiful head. Many crias on our farm and from fellow breeders show his qualities.

to the online shop